Smell and taste of wild mushrooms 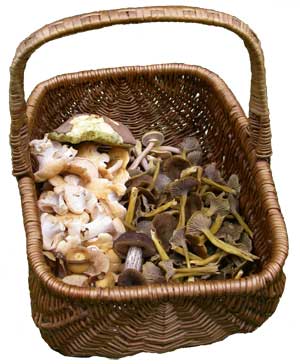 Although most of the clues for the identification of fungi are visual, smell and taste can also play a part sometimes.

Some fungi have distinct smells, or at least smell which help to separate them from other visually similar fungi. For instance, the Miller has a distinctive strong smell of meal. There are other obvious examples such as the Crab Brittlegill (smell of crab) and the Purple Brittlegill (smell of apples).

Mushroom guides also often give the taste of a mushroom as an identifying feature. This does not mean the taste of the cooked mushroom, but the raw flesh. Only small amount should be nibbled and broken up on the tip of the tongue. Be careful not to swallow any and spit it out after tasting. Be sure to completely clear your mouth. Apparently, this method can be safely used to taste even the most poisonous species (I've never been brave/stupid enough to try).

As well as specific tastes, how hot or peppery a mushroom is may be given as an identifying characteristic.