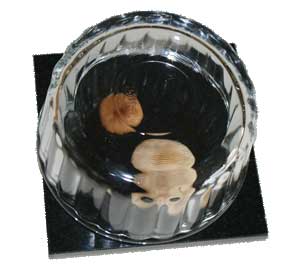 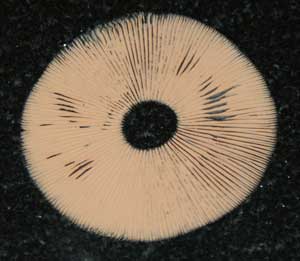 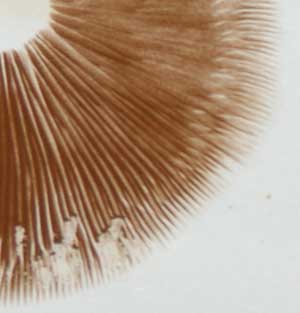 One of the more commonly used identification techniques is taking a spore print. The idea is to ascertain the colour of the spore mass. Whilst the spore colour isn’t enough to identify a species on its own, it is very good at eliminating possibilities. It can often be the major distinguishing feature between otherwise visually similar species.

The first thing you will need is something on which to collect the spore print. Simple white paper is often used, though it is actually not idea. White or very pale coloured spores won’t show-up well on white paper. An often suggested alternative is to use half white and half black paper. A benter alternative is a small square of glass. This can simply be held over a dark background when viewing light prints and a light background when viewing dark prints. The smooth surface also allows you to scrape together the spore deposit to get a clearer idea of the colour.

In order to take a spore print remove the stem from the fungus so that the cap can lie flat. Place the cap gill-side down on your glass (or whatever you’re using). Cover the cap with a bowl or jar to prevent the cap from drying-out too much and to stop drafts from blowing the spores around. Leave the cap like this for several hours (overnight is good).

Carefully remove the cap to view your spore print. As mentioned above, if you’re using a hard surface you can scrape the spore deposit together to get a clearer idea o the colour.